We have been in business in the SF Bay Area for over 29 years and have provided
music to over 6000 Weddings, Parties, Dances and Special Events.
We have an Amazing music library of over 50,000 songs - All Styles and Eras Music.
You Get to Choose in as much details as you like the music to be played or trust our
Pro Djs to read the crowd and get your guests Dancing.

The Goodtime Djs are 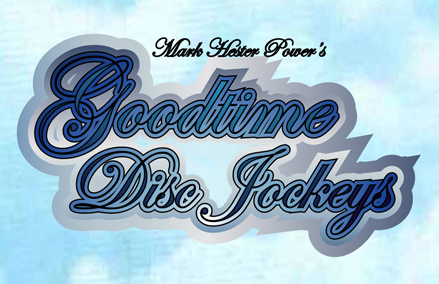 Our business was one of the first four Mobile Dj Companies in the Bay Area.
Founded by DJ owner/ Mark Hester Power in 1978.
Originally the Marin Mobile Disco, in the 80’s the name changed to the Marin Mobile Music Co.
and then after training and adding more Djs and expanding to serve the entire Bay Area
we became the “Goodtime Djs & Karaoke”.
We currently have 4 in-house Djs and are partnered with
3 other independent Djs that we work with often.

Mark wanted to be a DJ from the time he was 10 years old.  Studied communications and broadcasting at SF State.  Mark first saw a mobile DJ in the middle 70’s and decided to buy a DJ Mixer and put an ad in the local paper.   His first job was a Rainbow Girls Installation, then a Sweet 16 Birthday and a 50th Birthday party.  For each new job Mark would survey the client as to what music they wanted and would buy it.  Now 31 years later The Mark has built a music collection of over 50,000 songs, and still if you want a song that he doesn’t have he’ll get it for you at no extra cost.  In addition to being the Founder and Head DJ of Goodtime DJs. Mark is also an Singer, Entertainer, Vocal Impersonator & Singing Impressionist.
For wedding parties and receptions, Mark is a hybrid DJ/Singer. If you wish he will sing as little or as much as you like and DJ the rest.